The photo of today’s tree was taken with my iPhone up at Lake Margaret, here at our resort. I wanted to use the iPhone for the image so I could transfer and edit it on my iPad (much easier to edit on the larger screen). The iPad 2 has a camera, but the camera on the iPhone is of a higher quality. My preferred image processing app on the iPhone is Filterstorm, and I have the app on both devices.

The question – what is the easiest method of transferring the image from iPhone to iPad? I could use my computer, but trust me when I say that would be a very convoluted effort. What I waned to do was transfer the image wirelessly from one device to another. I could have used an Apple service known as iCloud, which would allow me to backup my devices to a storage center on the Internet and share images on both devices. However, this is not my choice, because I cannot choose the images that are stored in the “cloud.” It is an all or nothing proposition, which is not what I wanted. Instead, I am udse Dropbox. Dropbox is an internet service that allow users to upload files to a server, store them, and access the files on a multitude of computing devices. The service is free for the first 2 GB of storage — which works fine for me — and additional storage is available for a fee. I have a Dropbox app on both my iPad & iPhone. All I had to do was upload the photo in Dropbox on the iPhone, and when I opened Dropbox on my iPad the photo was there. Pretty easy!

I used Filterstorm on the to edit the photo — I adjusted the exposure, and then desaturated the image, leaving only the red picnic bench in color. Rather than use my fingers on the touchpad, I used a Pogo stylus, which made the editing so much easier. Below is the image before and after processing. 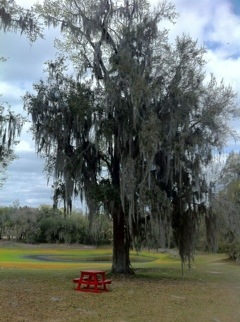 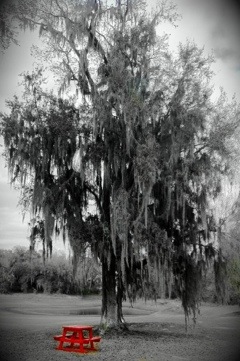