My go-to program for digital photo processing is Adobe Lightroom. I have been using Lightroom since its inception in 2006, when the first preview (Beta) version was released. During the initial Beta stage I wasn’t sure that I really needed Lightroom. It seem pretty neat, but I was a longtime Photoshop user, and it allowed me to do pretty fair job of photo editing. Lightroom was finally released in February 2007, and initially I did not plan to buy it. But when an updated version of Photoshop was released in the spring, I purchased Lightroom as part of an upgrade package — and I have never looked back. Lightroom is an amazing program for processing digital photos, and each version has been better than the last. The current release is version 3, and I used it yesterday to edit the sunset photo of the bus camper. Most often, after editing in Lightroom, I open images in Photoshop for finishing tweaks, but I didn’t bother with the sunset camper photo. If I had, I would have toned down the purple color, and maybe lightened the foreground a bit.

Two weeks ago Adobe released Lightroom 4 Beta, which I immediately downloaded. But, since we were visiting family and then traveling, I haven’t had time to try it out. Today I had some time to watch an online video about the new features in Lightroom 4, and learned that this version has been designed to eliminate the need to take the majority of photos into Photoshop (there is still a place for Photoshop for heavy duty editing). After learning a little bit about the new features, I processed the same photo as yesterday in Lightroom 4. I think the results are pretty telling.

I thought I was happy with yesterday’s image,
but I am much happier with the Lightroom 4 results. 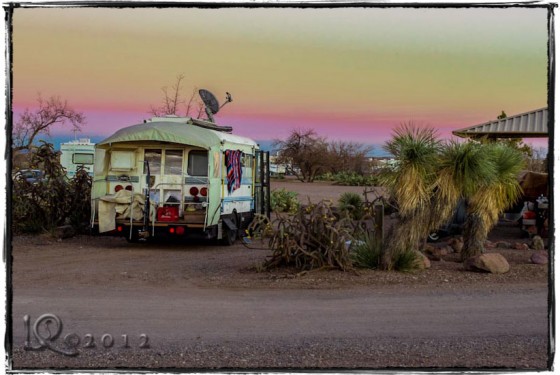